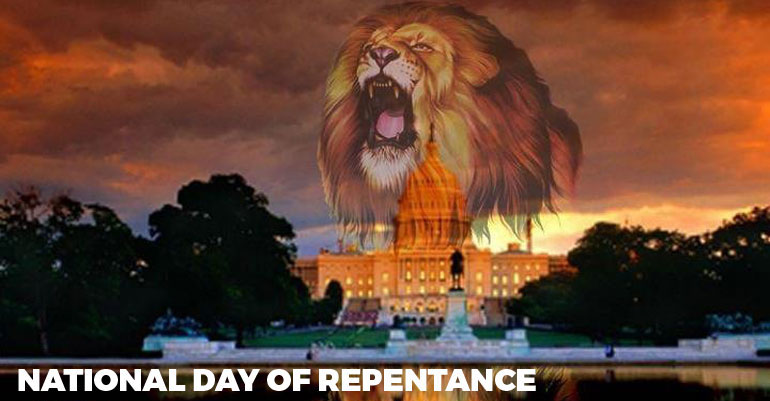 A Hue and Cry; Report on the annual days of Repentance and Prayer

“Repent” was the very first word Jesus preached. It’s the key to come into His Kingdom. It’s a privilege and a vital spiritual discipline to be purified as a member of His royal priesthood. The Risen Christ calls each of us daily to be zealous to repent so that we can overcome and sit on His throne as He overcame and sits on His Father’s throne. (Revelation 3:19-21)

The need for personal and national repentance is very clear. We need the help of the Lord to resolve our problems in every nation. His strategy needs to be followed: IF His people called by His name humble themselves and pray, seek His face, and turn from their wicked ways, then He will hear from heaven, forgive sin, and heal a land. (2 Chronicles 7:14).

Last year about 100 nations were praying and many fasting for the United States of America for the 5 days from the NDR to the NDP. People have reported that they sensed a definite shift in our state and nation the first week of May. Hallelujah!

National Day of Prayer (NDP) – 1st Thursday in May
www.nationaldayofprayer.org

The national theme this year for NDP was For Your Great Name’s Sake! Hear Us… Forgive Us…Heal Us! Taken from Daniel 9:19, which says, “O Lord, Listen! O Lord, Forgive! O Lord, Hear and Act! For Your Sake, O My God…”. As the 2017 National Day of Prayer arrived across the land, thousands of individuals, churches, and communities, millions of Christian’s heeded the call to stop and pray!  Scripture tells us again and again that our fervent prayer is effective. That our loving God responds to His children’s earnest pleas in mighty ways that avail much, and ultimately determine the course of history.

There were dozens of meetings around the state, including The Gathering at The Oregon State Fairgrounds.  An estimated 3,000-4,000 people attended. Many pastors gathered, and many different worship leaders collaborated.  Each brought a Scripture and the instructions for group prayer were delivered in three languages; English, Spanish and Russian.  A spirit of unity was high at the event during this church-wide gathering.

Peter and Jim led the noon event on the Salem Capitol steps for the National Day of Prayer. Officials read the NDP Proclamation, Peter Carlson read Gov. Kate Brown’s NDP Proclamation for Oregon, and overall it was a powerful time of of prayer and thanksgiving!

We are so grateful to report that many Oregonians heeded the call for repentance and prayer throughout Oregon. Across our state many Oregon people gathered for prayer meetings on the steps of county courthouses. They came from byways and highways to gather in prayer rooms, in homes, and on conference calls and in churches.  The hue and cry was lifted in prayer to Almighty God, our the Heavenly Judge, and He heard our cry.