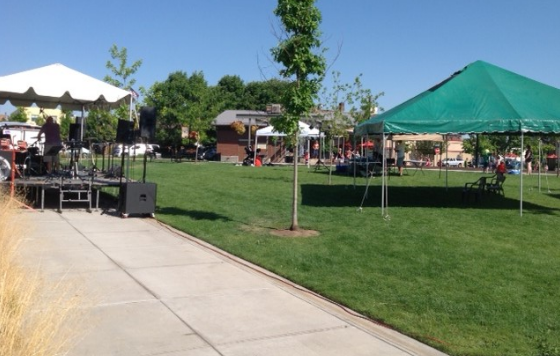 On July 29-30 several prayer teams gathered with 18 churches to conclude 30-days of continual prayer in Redmond Oregon. Cliff Baker, along with Jeff Reynolds and Daniel Burgious worked together as a perfect unit, tirelessly co-laboring and organizing this event.  We were honored and blessed by the worship teams that ministered throughout the event, especially those who traveled a distance. The Corvallis Heart of the Valley worship team deeply blessed us in their prayer over the city and worship to the LORD.  As teams worked in excellence and unity to set up the Tent of David in the heart of Centennial Park, there was a recognition of the LORD’s presence and acknowledgement of Him moving in their city, to God be the glory!

Kathy White, Redmond House of Prayer reports that “those who manned a prayer ministry tent, witnessed a time of people coming from the water playground to ask for prayer. Emily Bridges from Epic Center Healing ministry also helped lead people in repentance prayers and to Jesus.”  Jim Donohue, leader of Central Oregon Prayer Team, says that Friday’s 24 hour event, “Was the best prayer tent/worship/unity among 18 plus churches, as many hands made this work!”  Lynn Ferder, Roseburg House of Prayer, reported that her team was profoundly affected by the unity of this event saying, “It  was an honor for us to be invited to participate with the people of Redmond in this prayer and worship event. We we able to share their burden, joy and friendship. Our hearts were knit together in a deeper way and we will treasure this time forever.”

The final night, 6pm-Fri to 6pm-Sat, the prayer team at the ministry tent led 3 people in salvation, two in deliverance and two in healing. One family enjoying the park heard the worship on Saturday and was drawn to listen for about a hour. After the worship team was done they went down and led the family to the Lord. PTL!  One homeless lady was sleeping behind some bushes, which nobody knew about, only 100ft away.  She listen all night to the quieter worship during the night, especially when Lynn and her team from Roseburg were worshiping with the harp. Saturday morning she came in to pray for a job, and most importantly, to rededicate her life to the Lord. Thank you to everyone who prayed and participated in this event. The prayer teams witnessed the fruit of prayer in organizing this event; with no personal conflicts at all, no warfare, more unity, joy and His Holy Presence filled the park where hundreds of family members came to the water park that day to hear the worship, prayers and gospel preached.