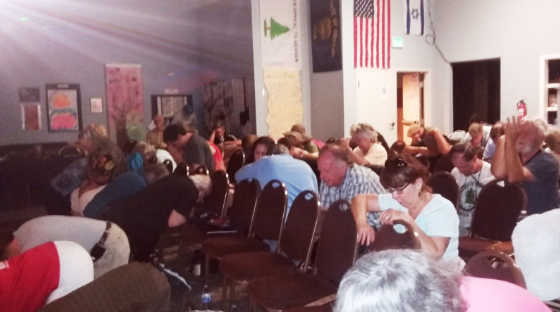 It was cramped and warm in the tiny room where we were having our weekly staff meeting. Things seemed fairly normal until we started talking about revival, then suddenly – it was as if the Lord just walked into the room. One of our staff members began to share about a vision he recently had while in the Prayer Room leading a worship / prayer set. “I saw the prayer room at Salem House of Prayer packed with Pastors and Leaders on their knees and faces, crying out to God for revival and saying: “Jesus, Son of David, don’t pass us by!”  What this staff person did not know was that there was such a meeting of Pastors scheduled to happen in just a few weeks! Pastors and Leaders from all over Oregon were scheduled to meet at SHOP during the 10 days of day and night worship & prayer at the State Capitol.

As the Lord would have it, right in the middle of the David’s Tent Oregon event, Evangelist Franklin Graham was also scheduled to be at the Capitol, calling Oregonians to prayer. A meeting of Pastors was scheduled immediately following Dr. Grahams message. The fact that God showed this young man a group of pastors crying out for revival was very encouraging to us. God was planning something big and letting us in on it. Needless to say, we were very excited!

Thousands came to the Capitol to pray. Right after the message, Pastors from all over the State of Oregon came to the Prayer Room at the Salem House of Prayer. The gathering was for the purpose of dedicating ourselves to increasing prayer in our specific regions of the State. The room was packed. His Presence was heavy. There was a high level of anticipation. SHOP worship leader Summer Zeller led us to the Throne of God in worship and after just a few minutes, just as the young brother had seen, we were indeed all on our knees and faces before the Lord.

After a time of dedicating ourselves to the purposes of the Lord for Oregon, we rose and took our seats. Peter Carlson and I shared some of what the Lord was doing in our State. Even though some things looked perhaps worse than they ever had before, God was moving powerfully and the enemy, true to form, had overplayed his hand once again. We believe that we are ripe for revival, and if we will cling to hope and increase our prayers, the Lord would “tip the bowls” of intercession that had been prayed by so many for so many years. Everyone agreed.

Finally, “connectors” from all regions of the State were seated at tables around the room, and a time was made for exchanging information so that praying people could connect when they returned home. The Presence of the Lord lingered. For weeks I had been hearing from the Lord, over and over: “It’s a historic day.”

I believe it was.